There is no doubt that the climate catastrophe threatens the future of life on the planet. A massive mobilization of the working class will be needed to combat this threat.

But, as Hurricane Ida and the associated flooding revealed, this is not just a threat to future generations — climate change is already a killer. Not only have dozens of people drowned in the hurricane’s wake, but hundreds are dead from the heat wave in the Northwest.

Structural failures under capitalism are compounding the climate catastrophe for the working class. As the Sept. 3 New York Times admitted, “Disasters cascading across the country this summer have exposed a harsh reality: The United States is not ready for the extreme weather that is now becoming frequent as a result of a warming planet.”

We see a clear lack of preparedness in the richest country in the world. There is no regard for poor, oppressed and working-class people, who get no evacuation assistance in a life-threatening situation and are basically left to their own devices.

Tens of billions is woefully inadequate.

Consider, on the 16th anniversary of Hurricane Katrina, how Louisiana and Mississippi were devastated, their governments still not fully prepared for another major weather event. One million people remain without power and with little gas and water during the worst heat of the summer. 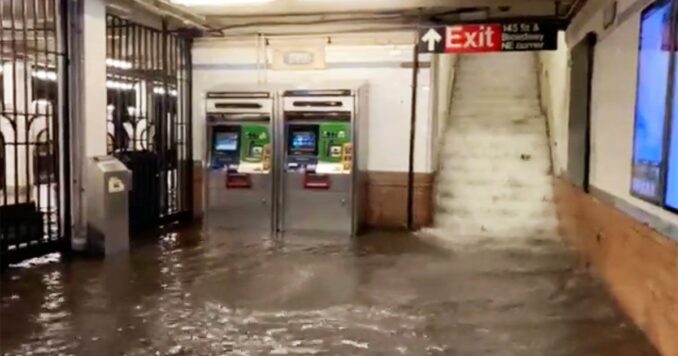 Throughout New York’s five boroughs and parts of New Jersey and Pennsylvania, people were trapped, some dying in flooded basement apartments, others unable to commute to work or do essential tasks due to collapsed roadways and bridges, totaled vehicles and flooded subways and expressways.

Lack of money isn’t the problem. There is incredible wealth concentrated in New York City and the surrounding areas, yet workers who produce that wealth were helpless in the rush of floodwaters. If the financial fortunes in Wall St. alone were taxed at the same rate as an average worker, funds could be used to prevent many of these tragic deaths.

Manhattan is an island of asphalt, with too little exposed soil to absorb floodwaters. The land was stolen from Indigenous people and then built up to serve the interests of finance capital — people and the environment be damned. As with every major urban center, money in the city budget — needed for infrastructure repairs and improvements — instead goes to city bondholders. Big Wall Street banks extort bloated interest payments from New York and other cash-strapped cities.

“The pattern of damage reflects the relationship between climate exposure and racial inequality; impacts were more apparent in low-income communities of color, which, because of historic inequalities, are more prone to flooding, receive less maintenance from city services and frequently experience lax housing code enforcement,” the New York Times acknowledges.

Environmental terrorism and environmental racism in the U.S. are part of the legacy of capitalist development.

And the situation is far worse in the colonized Global South.

But socialist Cuba, with far fewer resources than the U.S., has created a model for hurricane evacuation that looks out for every human being — and even pets and livestock. The whole population is mobilized, and no one is left to fend for themselves.

A program of working-class demands is necessary to meet the twin crises of global warming and faulty or woefully inadequate infrastructure: Money for flood protection and relief, not for war! Money for cooling centers in a heat wave, not for tax breaks to the rich! Money for green jobs, not interest to the banks! People and the planet before profits; make the fossil fuel industry pay to clean up the messes it made!

This is just a start. It will take a monumental struggle to win climate justice.

But rebellion is inevitable. Ida is the storm of wind and rain before the coming storm of protest. The challenge is to carry future waves of resistance through to their essential conclusion: a workers’ revolution for the abolition of capitalist wage-slavery.

Karl Marx and Friedrich Engels, writing in 1848, said the workers “have a world to win.”

There are no users currently online